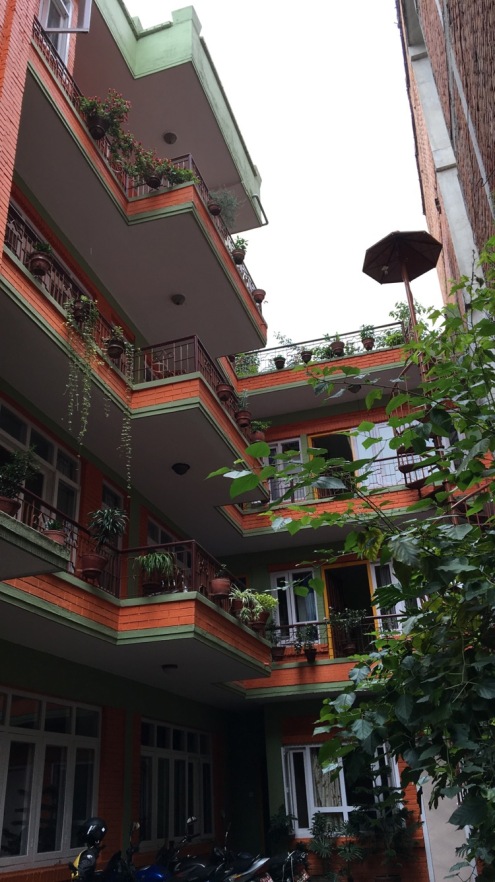 Our hotel in Kathmandu for tonight

Our travel team arrived safely in Kathmandu on Monday and we’ve already seen and heard so much about Nepalese culture!

We had the chance to shop around for some local clothes, sim cards and underwear in Thamel (Kristoff really insisted on buying Nepalese underwear). However, we were wholly unprepared for the hospitality that the locals welcomed us with.

At an Ncell shop we met Dipesh, the owner of the shop (Ncell is Nepal’s largest mobile network operator). As our sim cards took a while to set up, we managed to develop a conversation with Dipesh about the culture and also about the most beautiful destinations in Nepal. Afterwards, when we asked for places to go underwear shopping, he took it upon himself to personally guide us through the busy Kathmandu roads to a local shopping road. Here, we were safe from ‘tourist prices’ and where able to happily buy cheap and wonderful underwear for Kristoff (yay!) He had to then make his way back to his little Ncell shop, which he had completely abandoned for us, but not before we managed to get a group photo with him. (Photo will be added to this post as soon as I can organise all the files on my camera). He also added us on Facebook and we have just received a message from him asking how we are doing and wishing us well on our travels in Pokhara! Aw we love you Dipesh! ❤️

We have had many similar encounters with Nepalese locals, and we are beginning to understand how they as a nation are so well known for their selfless personalities and gestures of love.

Most stalls in Kathmandu open until 10pm so we had a great evening trying Nepalese cuisines (momos are life) and shopping. However, one thing we noticed was that around 9pm everyday in Kathmandu, there is a power cut. There are back up generators which are limited although they still provide basic lighting, which we were extremely grateful for.

Since it’s the monsoon season here it’s been raining periodically. It’s a great advantage that we are from the UK and are now very used to these conditions.

Breakfast tomorrow is served, we are told, at 6am so we must have an early night in for now. We will be travelling to Chitwan National Park tomorrow morning so we will next see Kathmandu after our volunteering month, during our second round of travelling.

We will keep trying to post regular updates when we have time to sit down and type, but until then…